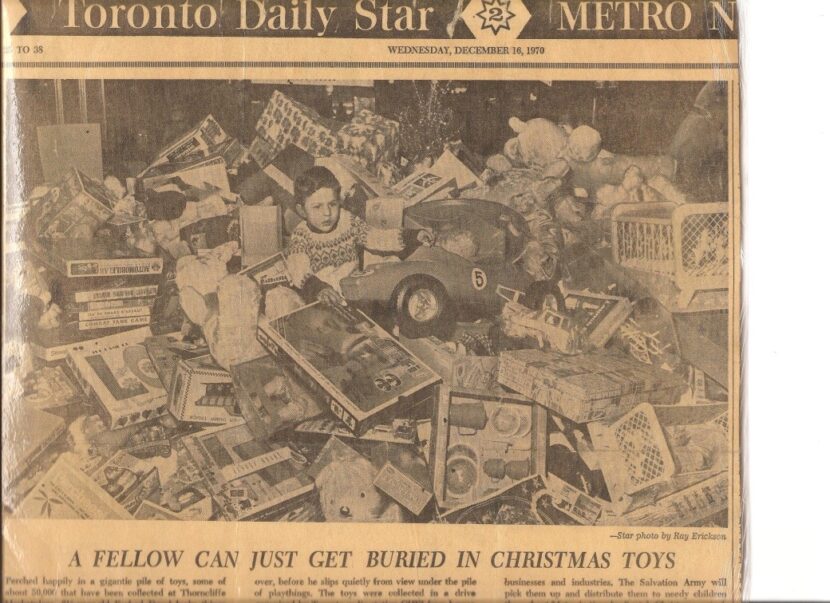 By Farhad Desai. © 2020 Beyond Binary Consulting.

My first memory of life was in December, 1970. I was two-and-a-half, holding my mother’s hand, and walking to Thorncliffe Plaza in the freezing rain – or pokey rain, as I called it then. We walked into the plaza, where the Salvation Army was doing a Christmas Toy Drive. One of the volunteers asked my mother if it would be alright if they put me on top of the toys and then put my picture in the paper. Welcome to life in Canada.

Just a few months earlier, on May 22, 1970 – 50 years ago today – my mother, father, brother and I arrived in Toronto as immigrants from Bombay, India. At that time, there was no social media, no What’s App, no Zoom, and not even email to keep in touch with friends and loved ones. There were very expensive long-distance phone calls that you had to arrange in advance with the operator. There were letters with stamps that took weeks to reach their destination, and then weeks to get the reply. There was limited access to news, sports, and entertainment from India – or many other parts of the world. There were no translation apps, and no YouTube videos of people talking about their experiences before and after moving to Canada. No cultural training.

In 1970, Toronto was Canada’s second-largest city and Montreal, the largest. But the 1970s brought terrorism against Anglos in Quebec. That started to unnerve all the corporations that had Headquarters in Montreal and there soon began an exodus to Toronto. Small businesses and families followed.

And it didn’t stop with people from Quebec. Toronto grew as Canada’s business city, and people from all over the country came here for jobs. Plus, every year in school we had students arriving from different parts of the world. Of course, we were from India, Pakistan, Bangladesh, and Sri Lanka. But there were also kids from England, Scotland, Ireland, Poland, France, West Germany, Austria, Holland, Czechoslovakia, Russia, Ukraine, Finland, Japan, Egypt, Armenia, Greece, Portugal, and Italy. We got American refugees, avoiding the draft for the Vietnam war. Add to that, new students arriving from Vietnam, Cambodia, Taiwan, the Philippines, Hong Kong, Israel, Iran, Turkey, Lebanon, Uganda, South Africa, Tanzania, El Salvador, Chile, Argentina, Peru, Brazil, Jamaica, Trinidad and Tobago, Barbados, Guyana, Venezuela, Colombia, Guatemala, Mexico, and I’m sure I’m still leaving out so many more countries. After a few years, Toronto overtook Montreal as Canada’s largest city.

Back then, we still had the six boroughs that made up the city – this was the main inspiration behind the nickname, the 6ix, as Toronto is popularly known today. Of course, there were no Raptors yet, no Blue Jays, and perhaps most amazingly, only three years removed since the Leafs last won the last Stanley Cup. We were still six years away from bragging about the CN Tower, and nineteen years before we saw Alan Thicke open the SkyDome. Toronto had a modest skyline, not yet filled with bank towers and condos.

The touristy neighbourhood districts like Little India, Little Italy, and Greek Town, were not touristy areas yet. They were known as foreign districts of the city, neighbourhoods where new Canadians would begin their lives here.

There was no citizenship test and no ceremony. We’ve watched the Canadian government create the immigration system we know today, create policies and infrastructure, and even a ministry of multiculturalism. In 1982, we witnessed the creation of the Canadian Constitution and Charter of Rights and Freedoms. This helped judges clarify their definitions of human rights, and that has led to changes in equity and quality of life in Canada in a remarkably short time.

These days, my wife and I take walks in a ravine nature trail near our apartment. Along with the breathtaking views and wildlife all around us, we marvel at the number of languages we hear. In 1970, new Canadians would be very cautious and mindful about speaking their native languages publicly. Today, the PM tells us diversity is our strength. And I agree with him.

Countries today compete over who gets the most qualified immigrants. The words, multicultural and international are beginning to describe every major city in the world. We live in a time when more people have the ability to choose where they want to live and move there in a matter of hours, not days, weeks, months, or years.

Cities and countries around the world are all trying to figure out how to successfully integrate new citizens. The nations that learn to leverage the diversity of the world for the betterment of each nation will be the leaders. Canada is in a good position to be one of those leaders.

Sir John A. Macdonald, the first Prime Minister of Canada, and one of the key founders of the Dominion of Canada, was a Scottish immigrant. He was only five years old when his family made their long trek to Upper Canada in 1820. His family came here because his father was in debt and wanted to start a new life for his family. This country accepts people from all over the world, puts them in a position for success and then reaps the benefits of a happy, healthy, well-educated, engaged, productive population.

Today, it feels like my life has come full circle. My wife is American. We lived in the US for five years, where she sponsored me as a permanent resident. Now, 50 years after arriving in Canada, I’m sponsoring her to be a permanent resident here, as we stay with my parents during the lockdown. And who knows, if she decides she wants to be a citizen, I’d finally attend my first Canadian citizenship ceremony.

So many of us have come to Canada for peace and opportunity. All of us together, over the years, have created the nation that we all enjoy today.

There are moments in history when the comforting structures of our lives are suddenly revealed to be illusions. And those illusions are shattered into millions of pieces right before our eyes. I believe this global pandemic is one of those moments. Some countries dealt with COVID-19 with denial, hoping to preserve comforting illusions of stability and exceptionalism, and hoped it would pass without fanfare. Others saw it for what it was and took action quickly.

We can think of our own lives the same way. When we’re faced with something unpredictable, unpleasant, or potentially life-changing, it can seem easier to deny it, to look the other way, or just hope it doesn’t impact us the way it has impacted them. And let’s be honest, for some of us, this has been a fairly successful strategy at times. But right now, we are all impacted by the virus. Regardless of class, nationality, ethnicity, gender, age, sexuality, phenotype, personality type, or communication style, denial will not help. We’re all watching old comforting illusions shatter and new paradigms form. And we’re all trying to navigate the quickly-changing nature of our lives, moment by moment. From global partnerships and economic alliances to what effective leadership looks like to who essential workers are to seeing what our personal priorities are. Everything is in flux right now.

At times like this, we have several choices in front of us. We can double-down on our illusions and hope the problem goes away. We can maintain certain aspects of the illusion that comfort us, and avoid the troubling parts. Or, we can take the bold action of acceptance. Acknowledge that what used to bring me comfort has now broken apart and been revealed as an illusion. Instead of picking up the pieces of illusion and attempting to put them back together, I can discard the broken shards and sit with the feelings of what is actually happening, even if those feeling are fear, loss, sadness, boredom, anger, powerlessness, or even happiness.

This is the opportunity that meditation gives us. It can provide us with many of the skills and tools necessary to help us navigate our thoughts and feelings, specifically at a time like this.

I don’t think of meditation as a suppressant, or a quick-fix solution to problems. I see it as part of an ongoing lifestyle and as an awakener of my mind. Meditation clears off the thick layers of dust that cover my lens of life. It scrapes clean all the psychic plaque that can build up without maintenance. It allows me to experience my life more fully and clearly. It provides a space for me to sit with myself – everything, the happy, the sad, the fear, the doubt, the insecurity – and not get stuck or overwhelmed with any one moment of stress.

With practice, we learn to focus on healthy choices, which often lead to more healthy choices. We learn to see life as it is, fully, clearly, with perspective, and without running away from our thoughts and feelings, when they are unpleasant.

Instead, we become stronger. We’re able to accept what is happening within us and around us. We are able to make choices that help us move forward in a healthy way and also give others around us permission to be calm, focused, grounded, and transparent in times of panic.

With practice, meditation gives us all the chance to be the leaders we are waiting for. And helps us to move forward. Together.